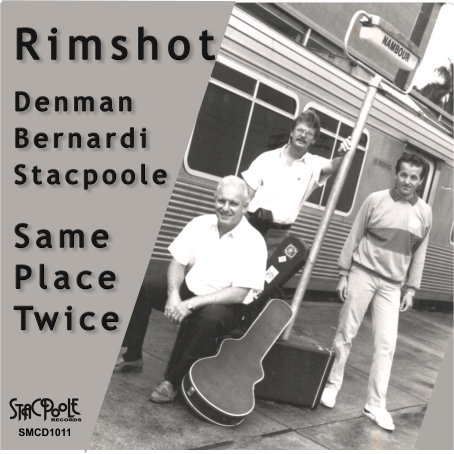 After a serious chat with Ross Williams (ex CBS) and with some persuasion from Paul Denman Lyle went into the studio in 1992 to record some songs with Paul and Noel Bernardi as Rimshot - the name Paul and Noel worked as.

It was initially released on cassette in 1992 but has now been re-released on Replicated * CD in September 2020.

This album is AVAILABLE TO ORDER ON CD * [AUD$24.50 inc postage within Australia]

I have been enjoying your music. Your lyrics are moving and the honest heart and feelings conveyed in your songs are touching. The album has amazing harmonies and I love the sounds of Saxophone and Didgeridoo.

Lyle Stacpoole:- Guitars and Vocals (Out Among the Faces / I Don't Know / Come Again)

Special thanks to Ross Williams and Paul Denman for getting this project started. Thanks also to Rod and Margaret Webb, Ian Carpenter and Peter Higgins for their support and contributions.

My sister and I were talking about where we were planning to move to. Well I had changed my plans all of a sudden and had decided to go to Queensland, rather than Perth. She still wanted to go to Perth, and eventually did, but in the meantime we were talking possibilities, and I said, "why don't you go back to Mildura?". After all it was a beautiful place and she had friends there, but she said "you can't go back to the same place twice".

I instantly knew that I had the title for a song right there, but it took another twelve years before I did eventually write it.